My family history from 1600's to present day

David Thomas Francis known to the family as Tommy was born about 1895 son of William and Sarah Ann Francis .  In 1894, the family had already lost their son John Victor who died aged 7.  Tommy was to have his mother for four years of his young life, Sarah died in 1898 aged 35.

My granddad 'Fred' was twelve when his mother died and he had to go out to work.  His father and my grand-dad had to support the family and a Mrs Jones who was rough and according to my granddad, a heavy drinker brought up the younger children.  None of us can imagine what it was like.

The 1901 census shows that Tommy was aged seven and had three older brothers living at home and a younger sister.  Tommy went to the local Church of England school at Hengoed how much schooling he had is unclear.  When Tommy was 17, he decided that he would embark on an adventure leaving his family and this country for pastures new.

On 17th April 1912, Tommy boarded the Themistocles at the .  The steamship was part of the Line, the Master A.H.H.G. Douglas there were 914 passengers on board bound for .  There is a copy of the passenger list in photos under my documents.  Tommy was passenger number 363 listed on page 9.  His entry read Francis Thos, Farm hand aged, 17.  On that page there were 12 other Farm hands listed.  Whether he knew any of them prior to his departure, I do not know.  However, filled with excitement and looking forward to his new life he said his goodbyes and headed for the . Records show that he was living in  when W.W. 1 started.

Tommy enlisted at Townsville and became Pte. David Thomas Francis No: 2137 of the 15th Bn. Australian Infantry Force.  Sadly, he was killed in action on the 8th August 1915 at he was 20.  He is buried at ASIA 51 Haider Pasha Cemetery, .  My grand-dad was listed as next of kin and informed of his brother's death at , Oswestry.

Haidar Pasha Cemetery was opened first for the Crimean War burials and later used for the burial of Commonwealth prisoners of war during World War 1.  The war graves plot contains 405 Commonwealth burials of World War 1 60 of which were unidentified.  Does this suggest that Tommy was taken prisoner of war? Must try and do more research.

WELCOME TO THE FRANCIS FAMILY

The 1901 census for lists William as head of the family aged 44 and a widower.  His wife Sarah had died in 1898.  It is quite hard to make out the writing of the address but it looks like "City", Hengoed although that is probably not the name.  Living at home with their father was George aged 16, Jane aged 11, aged 9, Thomas aged 7 and Edith aged 4. William was listed as a worker, occupation given as Gardener and George again listed as a worker and his occupation given then as Labourer Farm.

The Francis family were a bit of a mystery so at this stage I have concentrated on my Gran and Grand-dad.

My Grand-dad lost his mother when she died in () this had a devestating effect on his life style and at the age of 12 he had to leave school and go out to work.  This did not stop his hunger for self improvement and he taught himself to write in a beuatiful hand very similiar to Caligraphy.

I believe that he also had shares in a local company unfortunately the company concerned did the "dirty on him" when he was away during World War 1 and he lost them.  I can not go into further detail until I can prove one way or another what happened.

My Grand-dad William Edward Francis married Mary Jane Groves and although I write very fondly of my grand-dad he died when I was four.  The family stories are sketchy and as we all get older they become much diluted.

William Edward Francis born 18th January 1884 and called Bill to his friends.  When he met my Gran for the first time, she asked 'what is your name'?  He answered 'Fred'.  The story goes that for some reason he did not want her to know his real name nobody can remember why but to my Gran he was always 'Fred'.   They married in 1907.

The census shows that my Gran and Grand-dad were living at Oswestry, they had been married for four years and William was aged 27 and a Carter on the Railways.  My Gran was aged 29 and had given birth to three daughters, Dorothy aged 4, Connie aged 3, and Molly (Bertha) aged 1.  Their home at had five rooms.

My Grand-dad served in the first World War 1914-1918 he was out in and was enlisted in the RASC (Royal Army Service Corps).  He carried the postcard shown below with my 's picture, which reads:

Thank you to William and Michael from the Family History Society for supplying the information on the initials of the postcard and my Granddad's medal entitlement.

Thankfully, my Grand-dad was able to bring this photograph home himself.  His brother Tommy was not so lucky, see right hand column.  My Grand-dad was badly gassed during the War and this left him with a very red nose and although as a child I didn't know about his injuries my Mum said it did affect his lifestyle.

Gas was one of the greatest fears of the soldiers.  Seventy per cent of those gassed were mentally scarred by the exposure.  After being gassed they were considered fit for duty after six weeks.  I cannot begin to imagine the horrors my Grand-dad witnessed.   However I do remember this poem as a child that he used to sing as he chased me around his garden.

But someone still was yelling out and stumbling,

And flound'ring like a man in fire or lime...

Dim, through the misty panes and thick green light,

As under a green sea, I saw him drowning.

In all my dreams, before my helpless sight,

He plunges at me, guttering, choking, drowning.

In 1993 I attended a series of poetry and writing workshops and it wasn’t until then that I discovered the significance of the above verse.  My grand-dad had made it sound so much fun as he chased me around his garden I would have only been three or four.  My screams of laughter must have been very different from the screams of the men on the battlefield and only history can tell me the horrors he must have witnessed.  The above poem was written by Wilfred Owen and is a verse taken from Dulce et Decorum Est:  Incidentally Wilfred Owen was born on the 18th March, 1893 at Plas Wilmot, Oswestry.

On the 2nd May 1945 my Granddad purchased his Burial Plot at .  Thankfully, he lived another ten years but I do wander why he purchased this so soon after the end of the second World War.

My Grand-dad was an avid gardener when he was at home growing vegetables and flowers.  My favouritve flower from his garden was the Campanula, commonly know as the bellflower. They grew everywhere in the borders around his garden and were deep purple in colour.

Gardens at that time which was just after World War 11 were long and narrow they often had tiny lawns with borders for flowers, hedgerows were low to provide a border between properties but provided an easy way to talk to the neighbours.  The majority of gardens were given to the production of food for the family, cabbage, carrots, potatos, lettuce and tomatoes.  At the bottom of the garden near to the compost heap would be rhubarb and mint growing wild.  Food was grown and eaten in seasons.  If one family had and abundance of a particular crop them they would share with other family members or the neighbours. 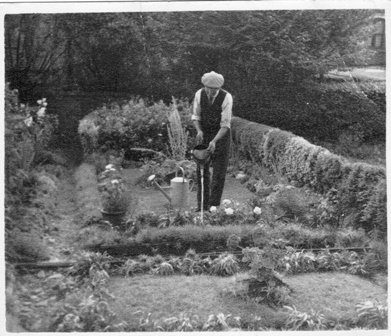 When my Mum and Dad married in 1950 my Grand-dad offered to give them a deposit for a house, my Dad being a proud man turned the offer down.  My Dad did not have many regrets in life but this is one in later life he wished he had taken.

Interestingly in May 2009 I was talking to another family member who remembers my Grand-dad as being rather strict and she described him as being very “Victorian”.  Apparently she remembers him making her and my Mum sit up straight at the table and not being allowed to speak.  This is not how I remember him.

My Grand-dad "Fred" died when I was four on the 5th April 1955 at his home of , Oswestry aged 71.  I remember him as a man who used to go down to the shops to fetch me sweets and told off by my Gran for doing so.  She used to say to him, "you will rot her teeth".  I think his delight at being able to buy me sweets came about because of the Second World War as sweets only ceased to be rationed in 1953.  Other things I remember he would sit me on his knee and bounce me up and down producing screams of laughter.  I also remember him pretending to chase me round his garden he was such fun.

In 1955, he had taken to his bed, poorly, so I thought; I decided to take him some brown bread and butter.  I tried very hard to give him the bread and butter.  What I did not know was that he had died.  When I went back to my Gran I told her he wouldn't eat his bread and gave her the plate back, I remember the awkward silence, then my Gran asked were the bread had gone and I told her I was hungry so I ate it, because granddad didn't want it.  Despite the upset of losing her husband, that little episode broke the silence and was remembered for years with laughter.  My mum and I still have a laugh about it.  This is how I remember my granddad with a smile and loads of laughter. If you look at the photograph below of the two of us I think he was very happy to be with me. 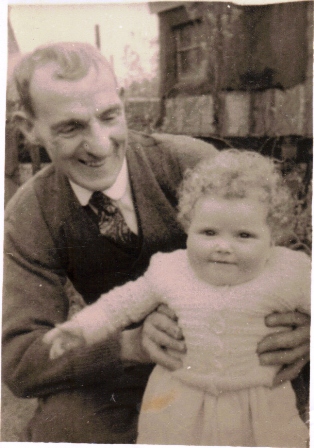 This notice appeared in the Oswestry Advertizer on 13th April 1955:  FRANCIS – The widow and family of the late William Edward Francis wish to express their grateful thanks to all relatives, friends and neighbours and colleagues at 17th Camp, Park Hall, in the recent sad bereavement, also thanks to Dr. Smithson.

All Content provided by Gaynor Leech all the material on these web pages is set out in good faith. Thoughts and interpretations are mine. Every effort has been made to acknowledge sources throughout this web site.  Copyright © 2012.  Photographs displayed on this website are owned by my family.  Photographs not owned by my family have been downloaded with the permission of the owners. Neither the whole nor any part to be copied or stored by any means including electronic means without our prior consent in writing.